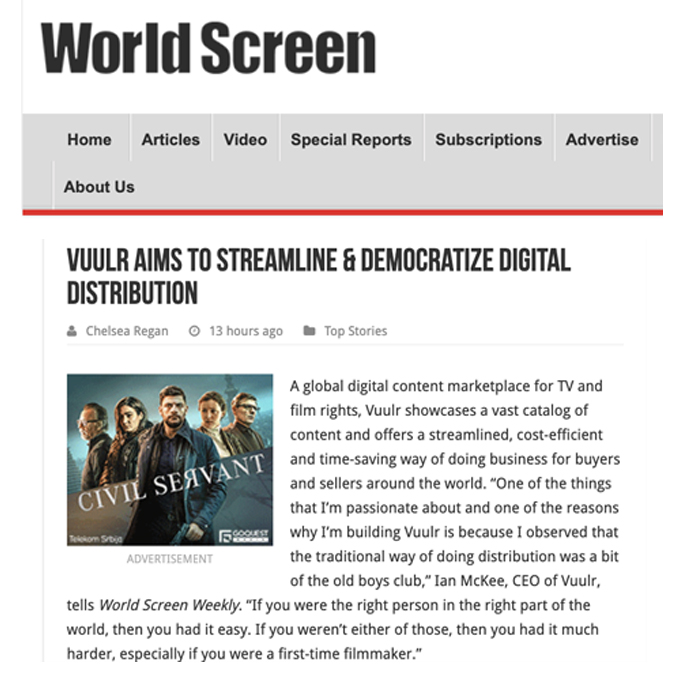 A global digital content marketplace for TV and film rights, Vuulr showcases a vast catalog of content and offers a streamlined, cost-efficient and time-saving way of doing business for buyers and sellers around the world. “One of the things that I’m passionate about and one of the reasons why I’m building Vuulr is because I observed that the traditional way of doing distribution was a bit of the old boys club,” Ian McKee, CEO of Vuulr, tells World Screen Weekly. “If you were the right person in the right part of the world, then you had it easy. If you weren’t either of those, then you had it much harder, especially if you were a first-time filmmaker.”

A key objective at Vuulr is to “democratize the access to distribution,” says McKee. The company is keen to list content from newcomers to the industry, provided the work is professionally produced and broadcast-quality. Once the content is on the platform, it’s presented to buyers of all sizes.

“It doesn’t matter whether you’ve got financial distribution muscle because you’re a billion-dollar company or whether you are an indie film producer; those two titles can sit next to each other and have equal opportunity to be found and bought by an acquisition team or a broadcaster or a streamer,” McKee explains. “In effect, we get diversity because we are a meritocracy. We have content from more than 110 countries and in more than 90 different languages on the platform. We are probably the single most diverse catalog of content that you could find anywhere in the world.”

The deal-making process on the Vuulr platform was built to provide a more frictionless experience for buyers and sellers alike. As streaming platforms have multiplied and audiences have become increasingly spoiled for choice, deal sizes have shrunk, diminishing the need for extended negotiations. “Deal values have come down, which means that people are much more ready to do deals without going through the negotiating process,” says McKee. “It’s either my paper or your paper; we won’t negotiate line by line. We’re enabling that increase in the number of deals that sellers and buyers are able to do through the Vuulr platform.”

The platform also “simplifies the process of submitting an offer from a customer, and we capture all of the data points that a seller needs to see to decide if that’s an offer that they can accept or whether they need to change something and counter the offer,” McKee explains. “We reduce the number of to-and-fro cycles to elicit all the information that’s needed. It’s about providing a bit of structure to the negotiating process.”

Among the new product features Vuulr has recently rolled out is its Bundle Deals, which allow a buyer to find a seller that has a slate of content and negotiate a single bundle of deals for several titles. “That’s really streamlined the process,” says McKee. “We’ve seen a lot of traction for that content.” The company has also launched its Branded Sales Platform, a Shopify-like experience that offers the ability to white label the Vuulr technology. This enables Vuulr’s partners to “attach our functionality to their website in their own branding with their own logo and their own colors,” says McKee. “That enables them to interact with their customers through their website, but that functionality is powered by Vuulr.”

Additionally, Vuulr has been teaming up with geographic experts in regions around the world. The company is working with a partner in Dubai that is building a marketplace specifically for the MENA region, focusing on Arabic content and content that is suitable for the Middle Eastern market. It also has a partner in Moscow for the CIS and Belarus market. “We’re giving opportunities for these partners to spin up specialist marketplaces for creative content that’s suitable for their geography,” McKee says.

At present, it’s a time of big change throughout the global content industry, all the way down to its very structure, which McKee sees as a positive. “It’s a fascinating time to be in the industry and a great time to be in the industry,” he says. “There’s more money in the business of content today than ever before, and the ability to deliver content to lure consumers and the number of consumers equipped with the devices to consume it globally is exploding.”

“The digital transformation is happening and it is driven because of what technology enables and the change in business models that that enables,” McKee adds. “What Vuulr does is it fits in to enable some of that change to happen. We’re digitally transforming the process of distribution and acquisition.”

It’s Vuulr’s aim to make it easier for sellers to find new customers and to license content into new parts of the world, while making it easier for buyers and acquisitions teams to find that content. The speed at which these deals are made is also a primary focus. “Deals on the platform close in about ten days versus the three to six months it would typically,” says McKee. “We’re allowing the industry to become a bit more agile and nimble, to be able to respond more quickly to audience preference changes.”

As far as the buy-in from the industry at large on the advantages of digital platforms, McKee has seen an inevitable shift that was only sped up by recent events. “Covid-19 put that change on fast-forward,” he says. “You can do part of the business digitally, and when you do it digitally, it is faster, it’s more efficient and that means it’s cheaper—I know we’re not supposed to use the word ‘cheaper’—but it means you spend less money on airplane tickets and hotel rooms and bar bills entertaining.” He adds, “What won’t go away is people wanting to meet and have relationships, but I think what will happen is that the actual transaction will move online to be digitally enabled.”

Vuulr has had a strong start in 2021, building on the momentum that the company picked up last year. According to McKee, Vuulr has seen “increasing interest from everyone we’ve talked to about what we enable—technology that is designed to support the industry—and lots of conversations with people who want to list, people who want to buy and then other people who are in the industry to see how they might partner with us. Vuulr is a very open platform and it’s the work of people to build an ecosystem.”