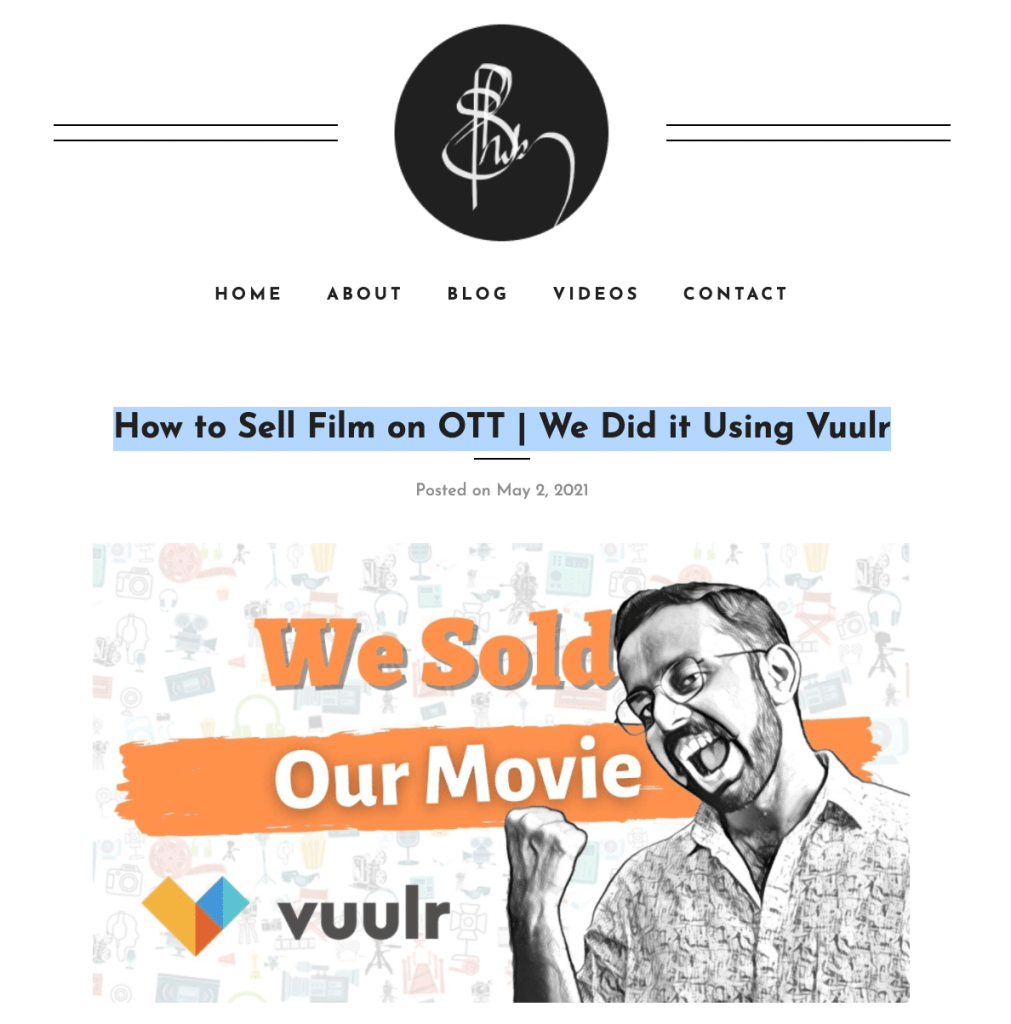 Do you have in your hand a feature film, a short film or a web series that you want to sell? Or will you be producing one soon and want to know how to sell the film on OTT? Then this is for you.

We made a film. I became the first filmmaker from Kerala (India) to have made an entire feature film on an iPhone. I am a first time filmmaker. Nobody knew this film director called “Ashik Satheesh”. The cast was not famous stars. We didn’t have any money left to market the film, because we had to spend the marketing budget, even the contingency budget, just to finish the film. How then could we sell the film on OTT?

Why Sell The Film?

If we did not get the film onto an OTT platform (in case you do not know what OTT is, it means Over The Top. Just think of Netflix and Amazon Prime) and make the money back then we can’t pay the crew. I can’t pay my friends and family who crowdfunded the film. If I don’t pay them they might never give me money again to make another film. And probably no producer will ever give me money because my films won’t sell.

If you are a filmmaker I’m sure you have had these fears as well. In this episode, I tell you the story of how exactly we got our film listed on a marketplace, for free and how we did sell the film on an OTT platform. Hi and welcome back. If you are new here I am Ashik Satheesh, the writer and director of Munnariv (2020), Malayalam’s first iPhone feature film. On this website, we learn the intricacies of how to tell great stories and thereby make the world a better place, one story at a time.

How I Tried to Sell the Film on OTT

I wanted Munnariv (Foreknowledge) to reach all Indians who loved science fiction and those who want to experience something they have never seen before. Having the film on an OTT platform seemed the best route since we couldn’t get any theatres. But I had no contact in the industry. So I did what I could do. I went onto LinkedIn found everybody who had the title “Content Acquisition” and mailed everyone one of them. I emailed everyone from every platform I could find. But we kept getting rejected.

I was afraid to accept that I failed, that if I did I will lose my motivation to try and make it happen. So I held on dearly trying everything to get the film out. I tried my best. But I failed nonetheless. For the whole of last year, I was probably berating myself for being a loser, a filmmaker who can’t even sell his film. How was I ever going to make another film!

It took me time to realise that I was just being harsh on myself. I was comparing my first film against that of people like Robert Rodriguez and Steven Spielberg. I guess at some point I had to accept that it was not going to happen for me as it did for them, that I failed in meeting an unrealistic expectation that I had set up for myself. It took me time to accept that.

When Curiosity Leads You

I had to shift my attention elsewhere or I would keep being critical about myself. One of the things that I am interested in is technology. That was what lead me to become an Engineer in the first place. A tech that fascinated me is called Blockchain. I don’t believe I understand it enough to explain it to anyone.

Anyway, I came across a site called Vuulr (referral link) that used this blockchain tech to bring film production companies in touch with film distributors. And that fascinated me. For the heck of it, I decided to sign up. You need to have a registered company to do that by the way. Ashik Arts is a Limited Liability Partnership registered with the Registrar of Companies of India. So I created an account and listed Munnariv as a film that we wanted to license. I didn’t have many hopes because I had tried all the platforms and failed. I didn’t even want to look into it so I checked the box to alert me with an SMS if we received an offer and forgot about it.

Surprisingly a few days later I received an SMS saying that we have received a proposal. Woh! Ecstatic I immediately jumped onto my laptop and opened Vuulr. I didn’t understand a word of what it said. We hadn’t received a proposal for Munnariv, but we were being asked to send a proposal. It was a Request for Proposal or RFP. I edited RFPs when I was working, but I had no idea how to make one. Especially not for a film. So I did nothing.

Then a few days back I got another SMS saying we got an offer. I didn’t even open Vuulr till the next day. This one was different. This was an actual offer to licence Munnariv. That can’t be right, can it? No, no. I closed the laptop and left. I didn’t open to it till the next day. And there still it was, an offer to licence Munnariv for an OTT platform. The OTT platform is an upcoming one based out of Chennai called Viventra. They are scheduled to open this month and they wanted Munnariv to be one of the films in their opening collection.

They wanted to license Munnariv for a year. We did not have to pay them any upfront fees nor were they paying us any. From what I understood, films will be available on Viventra for people to rent for ₹50 and ₹100. Whenever someone rents/buys Munnariv, we will be paid half of that money as our fee. I was apprehensive. Actually scared would be the right word, because it felt like it was too good to be true. This couldn’t be right. There had to be a catch that I was probably missing. For example, we currently have Munnariv on YouTube. Why would someone buy a film that is already available for free?

I wish I could talk to a fellow film producer on how to sell films on OTT. All the licensing terms were confusing for a newbie like me. What if I made some stupid mistake? What if we lost the film’s license? My mind kept throwing such fears at me. But I did not know anyone I could talk to. So I talked to a couple of my friends. We figured out all the things that I could actuallly screw up. I was mainly worried that I would make some mistake as I did not understand the terms. So I went about finding solutions to that.

Firstly I got in touch with the Viventra team. I asked them if they were okay with us retaining the film on YouTube. It turns out they were perfectly fine with it, which I wasn’t expecting. I thought they did not know that the film was on YouTube and was sure that they would back out when I told them.

Instead they told me that YouTube is an Ad-supported means of selling films and theirs was a pay per view transactional way. Viventra only wanted non-exclusive rights to the film, which meant that if tomorrow we got an offer from Netflix or Amazon Prime we could have the film there as well. Now that’s something.

The next thing I did to make sure that I understood the terms properly was that I got in touch with my Chartered Accountant friend. We went over the licensing terms, the taxes, payment terms and so on. He verified it all and said everything was alright. By now my fears were starting to melt and I was starting to see the opportunity that was in front of me.

What We Gain and Give by Selling Film on OTT

Viventra’s offer estimates that there will be 300 to 500 purchases each month, which will earn us around ₹7,000 to ₹25,000 each month. From that will be cut the taxes and a 10% commission for Vuulr for facilitating the deal. The exact figures we make will be something to be seen in the future. Would you like a follow-up episode on that? Subscribe to my newsletter and to know about it.

What is more important than getting payment is that we will be reaching a new audience. So far Munnariv has been seen by 13,000 people on YouTube. Which isn’t a big number. Most people come on YouTube for short entertainment, something along the 5 to 20 minutes duration. It is not the best place for a 90 minutes long feature. But an OTT is. People come on OTT platforms to be entertained for an hour and more.

By this, I do not mean to say that money doesn’t matter. Of course, it does. If we get the film to a newer audience and through that make some money then nothing like it. I can finally pay everyone back and maybe even get to fund my next film ourselves. Who knows.

Another advantage is that Viventra being a new platform they will try to promote it to as many people as they can. And Munnariv will get to ride that wave.

What Are The Assets Needed to Sell Film on OTT?

All in all, when we analysed the risk we found that the deal was actually a good one, for us and as well as for Viventra. Hence we signed the deal, and handed over all the required assets as per their specification, which were the following:

I so wanted to have Munnariv on an OTT platform and tried every means possible to make it happen. I tried hard. But it just didn’t happen. That made me feel like a failure. It stressed me out and made me sad. To divert my mind I followed some tech curiosity of mine, which randomly led me to a website, where I put up Munnariv for the fun of it.

And then exactly after a year since we released Munnariv on YouTube, it has now been picked up by an OTT platform film. Now I am sitting here wondering how in the hell did all that happen! It happened not because I tried hard to achieve it. I was only following my natural curiosity, having fun, learning. If someone like me who knows no one in the industry can get his film onto an OTT platform, then you can too.

I hope this new venture brings good opportunities to everyone that made the film happen. Thank you all for being part of this journey. I will update you with more details as they are available. Subscribe to my newsletter for that. If you are a registered film production company signup for Vuulr for free. Use my referral link iashik.com/vuulr. I will get a small commission if you finally end up selling the film on Vuulr, and thereby support this website.

If you are an aspiring filmmaker and you liked this episode, then you’ll love my book that is now available on Amazon called The Indian Indie Film (or Make Your Film for rest of the world). In it I go in-depth on how I debuted my film career making a feature film for ₹5 lakhs ($7,000) on an iPhone so that you can too. Thanks for reading, and see you there.